As nearly most of the other Makkan surahs, surah At-Takathur reminds us of the hereafter, resurrection, and accountability before Allah the Almighty. 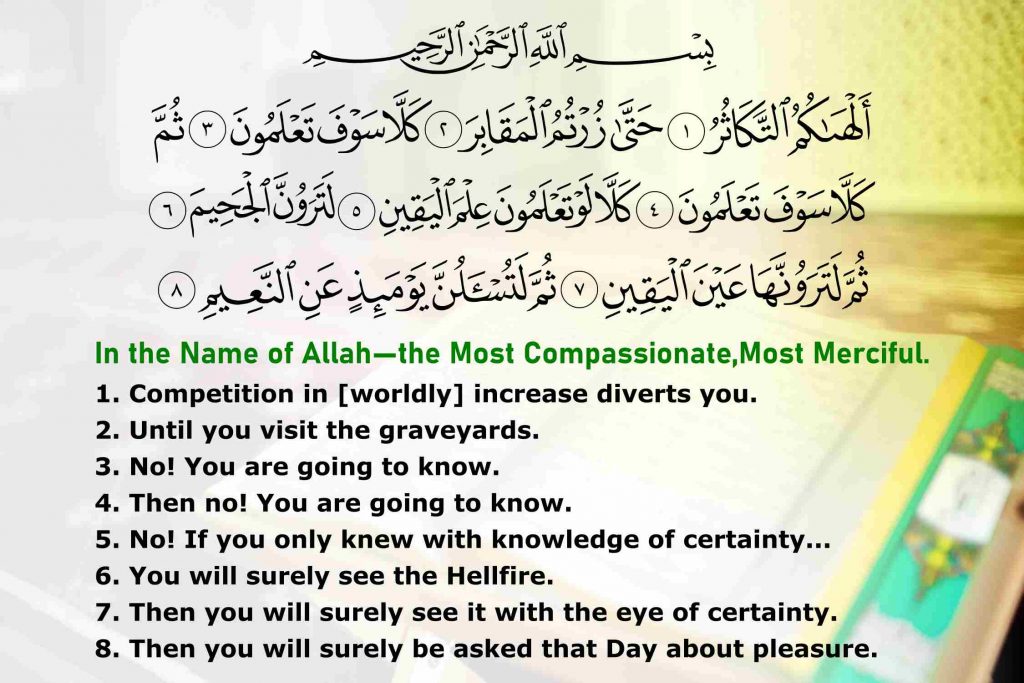 Surah At-Takathur warns of the dangers of heedlessness of the Hereafter which results from one’s deep immersion in worldly gains and the rivalry for such gains until one dies.

This is compatible with the hadith narrated by Ibn `Abbas and Anas Ibn Malik (May Allah be pleased with them). They reported that the Messenger of Allah (Peace and blessings be upon him) said:

“If a son of Adam were to own a valley full of gold, he would desire to have two. Nothing can fill his mouth except the earth (of the grave). Allah turns with mercy to him who turns to Him in repentance”. (Al-Bukhari and Muslim)

Alhakum: Diverted from being thankful and worshiping Allah.

At-Takathur: Boasting of the wealth and the number of children you have.

Reflections on the Surah

Allah the Almighty says what means,

{Know that this worldly life is no more than play, amusement, luxury, mutual boasting, and competition in wealth and children.} (Al-Hadid 57:20)

This truly depicts the reality of this present life in its material form – our inclination towards amusement, diversion, competition, and boastfulness of our wealth and children.

Those who deny the resurrection and, thus, judgment, their hearts, as well as their eyes are blind.

They are preoccupied with accumulating worldly gains and competition with each other until death overtakes them.

It also warns everyone of being ungrateful to Allah, the Sustainer of all, Who deserves ultimate gratefulness for all the blessings and favors He constantly grants His creation.

`Umar ibn `Abdel `Aziz deducted from this Surah evidence which proves the Day of Resurrection. He understood this from the term “you visited”, as a visitor does not stay forever, the dead ones would not stay forever in their graves. One day, they must leave and return to Allah for judgment.

“Then no”, meaning that the matter is not as you believe or think.

“You are going to know”, this is threatening; the Qur’an is telling them that they would come to know the bad consequences of their false beliefs and misconceptions.

“Then no! You are going to know”, another threatening expression, restated for emphasis.

“If you only knew with knowledge of certainty”, you would not have preoccupied yourselves with such competition and rivalry.

“You will surely see the Hellfire”, meaning that if you had certain knowledge of the fact behind this, you would have known for sure, that you would be thrown into Hellfire as an equitable recompense.

“Then you will surely see it with the eye of certainty”, in the previous verse, you have been told about this and you mentally know it. However, now, you would feel it as you would be thrown into it, personally and physically!

“Then you will surely be asked that Day about pleasure”, all kinds of pleasure in this present life such as food, drink, sexual need, health, lofty position, leisure time and all other forms of pleasure and enjoyment.

The Prophet Recalls This Verse

This is attested to by the hadith narrated by Abu Hurayrah who said:

“Messenger of Allah (Peace be upon him) went out (of his house) one day or one night, and there he met Abu Bakr and `Umar (May Allah be pleased with them) also. He (peace and blessings be upon him) said, ‘What made you leave your houses at this hour?’

They said, ‘It is hunger, O Messenger of Allah.’

He said, ‘By Him in Whose Hand my soul is, what made you leave, made me also leave, so come along!’

And he went along with them to a man from the Ansar, but they did not find him in his house. When the wife of the man saw the Prophet, she said, ‘You are most welcome.’

Messenger of Allah (peace and blessings be upon him) said to her, ‘Where is so-and-so?’

She said, ‘He went to fetch some fresh water for us.’

In the meantime, the Ansari came back, saw Messenger of Allah (Peace be upon him) and his two companions and said: ‘Praise be to Allah, today no one has more honorable guests than I.’

He then went out and brought them a bunch of date fruit, having dates, some still green, some ripe, and some fully ripe, and requested them to eat from it. He then took his knife (to slaughter a sheep).

Messenger of Allah (Peace be upon him) said to him, ‘Do not slaughter a milch sheep.’

So he slaughtered a sheep for them. After they had eaten and drunk to their fill, Messenger of Allah (Peace be upon him) said to Abu Bakr and `Umar (May Allah be pleased with them),

‘By Him in Whose Hand my soul is, you will certainly be questioned about this treat on the Day of Resurrection. Hunger brought you out of your homes, and you do not return to your homes till you have been blessed with this treat’”. (Muslim)

Don’t mistake Surah to mean that we shouldn’t enjoy the lawful pleasures of this present life but we should not forget that we will be questioned about these treats on the Day of Resurrection. Consequently, one should always thank Allah and show gratitude to Him, Glory is His.

We should be thankful to Allah for all His graces, favors and blessings with one’s heart, tongue, and limbs. This means that our hearts should always be filled with thankfulness and gratitude to Allah; our tongues should always be remembering and thankful; and our limbs should always use these divine favors in His obedience, Glory be His.

Finally, we must restrain ourselves from greed and be content with what Allah has given us as contentment is an inexhaustible treasure!

This article was originally published by AboutIslam.net on Feb 20, 2020. The original article can be viewed here.

Surat Al-Ikhlas: A Few Verses That Equal One-third of Quran

8 Examples of Islam’s Care for Relatives