The war against Islam as a faith, its Prophet (peace and blessings be upon him), and its advocates, has been relentless from the time that the Prophet was assigned his noble mission of calling people to the path of guidance.

He encountered hostility and enmity, even at the hands of his close relatives and fellow community members; male and female.

Similarly, anyone who advocates for Islam, be s/he a born Muslim or a new Muslim who found the path of truth and became a scholar or da`iyah for this pure monotheistic faith, surely encounters numerous obstacles and hardships.

They face tremendous pressure and defamatory campaigns by individuals, pressure groups, or even governments.

However, a short Surah from the Qur’an teaches us that the war is not waged against those callers to Islam or even the Prophet (peace and blessings be upon him).

Rather, it is against the One who assigned them to call upon people to follow this path of guidance; Allah the Almighty. This Surah is called, Al-Masad.

Below is a brief introduction to the Surah and its main objective. 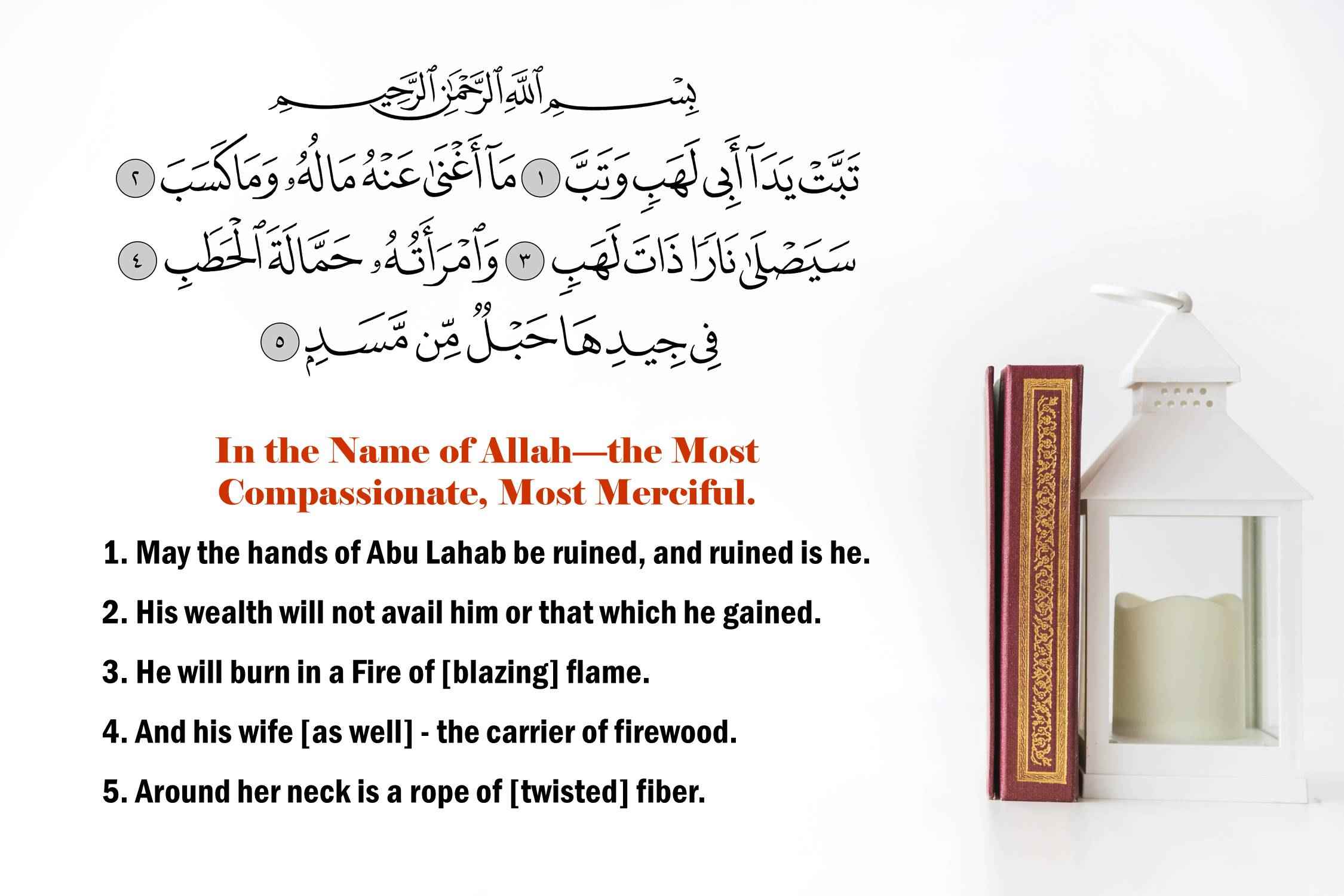 The Reason for its Revelation

This Surah was revealed in Makkah.

It was narrated by Ibn `Abbas:

“When the verse, “And warn your tribe of near kindred} (Ash-Shu`ara’ 26:214) was revealed, Allah’s Messenger went out, ascended As-Safa mountain and shouted, ‘O Sabahah!’

The people said, ‘Who is that?’

Then they gathered around him, whereupon he said,

‘Do you see? If I inform you that cavalrymen are proceeding up the side of this mountain, will you believe me?’

They replied, ‘We have never heard you telling a lie.’

‘I am a warner to you of a coming severe punishment.’

Abu Lahab said, ‘May you perish! You gathered us only for this reason?’ Then Abu Lahab went away.

Overall Theme of the Surah

This Surah was revealed to counter the attacks and the hostile campaign launched by Abu Lahab and his wife, Umm Jamil, against the Prophet (peace and blessings be on him). Allah the Almighty took it upon Himself to defend His messenger and establish the final word on his behalf.

The final word being that the Prophet (peace and blessings be upon him) was to become victorious, his mission would be accomplished, and his haters and enemies would eventually perish and be tortured in Hellfire.

So, neither the Prophet, nor those present callers for Allah, should fear anyone or be hindered by any hate or evil campaigns, even if they were denounced and challenged by their own blood relatives or fellow countrymen such as what recently took place in New Zealand and the US.

Moreover, what is expected from these advocates of the faith is to rely on their Lord, and continue their constructive efforts until Allah’s Word becomes prevalent. By looking at Abu Lahab and his wife’s fruitless, hostile campaign and their fate, Muslims should be more confident in the One Who watches over them, Allah the Almighty.

Tabbat/wa tabba: The Arabic term, tabba, stands for either ‘doomed’ or ‘perished’.

Abu Lahab: One of the Prophet’s uncles. His name was `Abdul `Uzza ibn `Abdul Muttalib. He was called Abu Lahab because of the radiant appearance of his face.

Masad: (A rope of) palm fiber.

Their Enmity to the Prophet and Islam

The Surah relates to us some of the enmity of Abu Lahab and his wife, Umm Jamil, toward the Prophet (peace be upon him). They hated the Prophet and left no stone unturned in their endeavor to discredit and hurt him.

The above hadith shows how adamant Abu Lahab was in his enmity. He himself once said,

“Even if what my nephew (the Prophet) says is true, I will save myself from the painful torment on the Day of Judgment with my wealth and my children.”

But the Qur’an answers him as saying, {His wealth and his children shall avail him nothing.} (Al-Masad 111:2)

He even ordered his two sons to renounce their engagement to the Prophet’s two daughters as they were engaged to them before his prophetic assignment.

Many accounts from the Biography of the Prophet (Seerah) demonstrate Umm Jamil’s unrelenting enmity toward the Prophet too.

She was a loyal aide to her husband in this matter and did her best to inflict harm upon the Prophet (peace be upon him).

So, as she was supportive of her husband’s disbelief and obstinacy, she will be helping to administer his punishment in Hellfire.

She will carry the firewood and throw it upon him to increase his torment using the twisted rope of palm fibre around her neck.

Amazingly, the Arabic term, tabba, is used twice in the same verse but with two different senses:

The first appearance of the term is used as a prayer: “May the hands of Abu Lahab be ruined,”

This prayer has been already answered, as is implied by the second appearance, wa tabba: “and ruined is he.”

So, the battle is won by the One Who cannot be defied or challenged, Allah the Almighty.

The rest of the Surah mainly describes Abu Lahab’s and his wife’s fate for what they have done.

Al-hamdulillah, it was a short battle that was won with ease.

This article was originally published by AboutIslam.net on Jun 18, 2019. The original article can be viewed here.