Surat Al-Ikhlas: A Few Verses That Equal One-third of Quran

Makkan Surahs of the Qur’an were revealed to confirm the Oneness of Allah the Almighty, belief in Him, His Books, His Messengers and all other articles of faith.

These surahs are characterized by the shortness of their verses, conciseness in wording, and sharpness of reasoning; defying the unceasing attempts of idolaters to distort the new faith, its Messenger and its Originator (Allah the Almighty).

These attempted distortions were, and continue to be, propagated by many; including atheists, agnostics, idolaters, and polytheists.

Among the Makkan surahs is Al-Ikhals, which draws delineates the Divine Qualities and Attributes of the True Creator in a way that affirms His Oneness and Uniqueness. 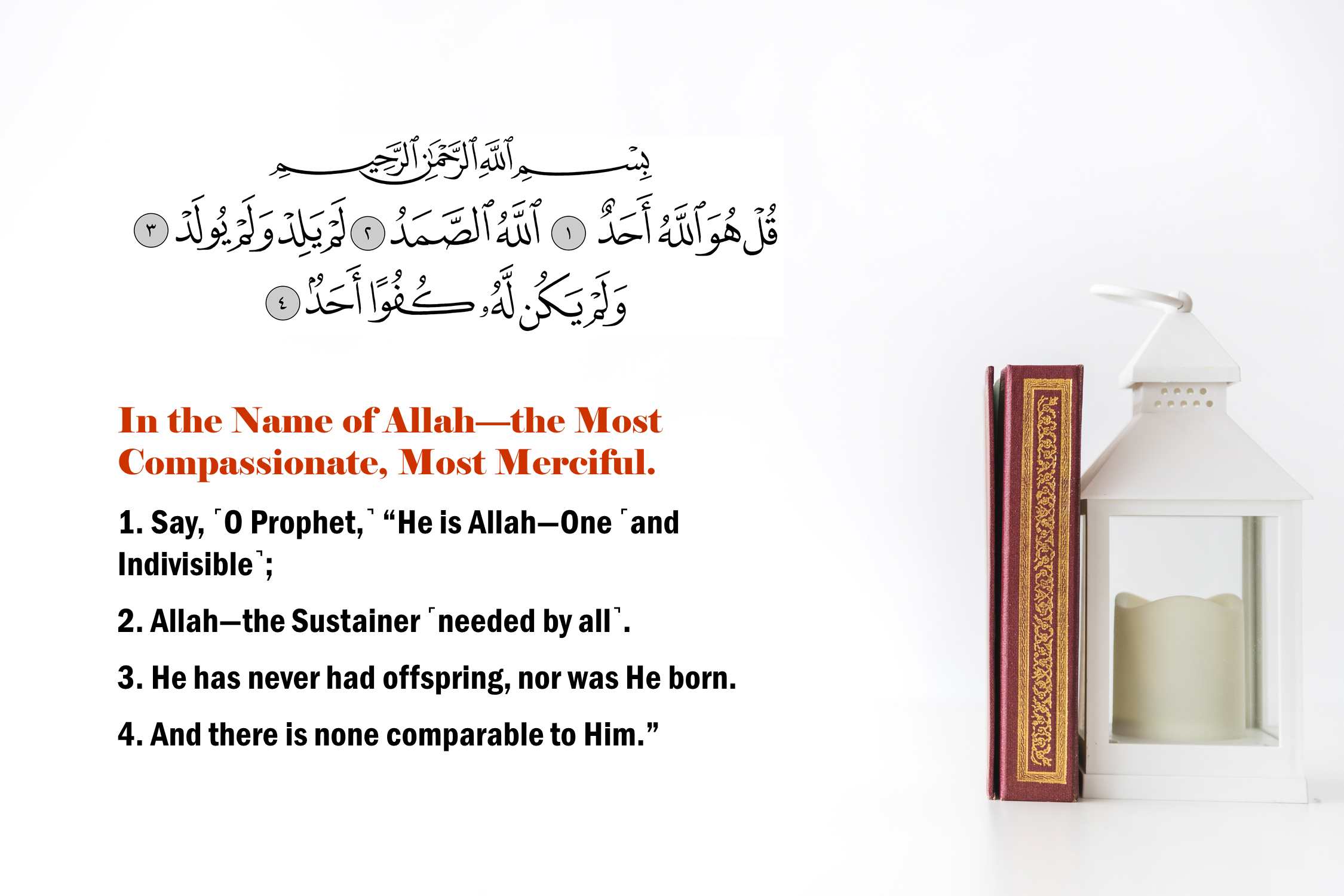 Surah Al-Ikhals (Chapter of ‘The Purity’) was revealed in Makkah.

Regarding the reason for its revelation, Imam Ahmad recorded from Ubayy ibn Ka`b, that the idolaters said to the Prophet (peace and blessings be upon him):

“O Muhammad! Tell us the lineage of your Lord.”

He has never had offspring, nor was He born.

And there is none comparable to Him.”} (Tafsir Ibn Kathir)

The fact that this surah is equivalent to a third of the Qur’an is manifest through the following two hadiths:

The next morning, he went to the Prophet and informed him about it as if he thought that the recitation of that Surah by itself was not enough.

Allah’s Prophet said, ‘By Him in Whose Hand my life is, this Surah is equal to one-third of the Qur’an!’” (Sahih Al-Bukhari)

“The Prophet said to his companions, ‘Is it difficult for any of you to recite one-third of the Qur’an in one night?’

This suggestion was difficult for them so they said: ‘Who among us has the power to do so, O Allah’s Prophet?’

The Prophet replied that Surat Al-Ikhlas is equal to one-third of the Qur’an. (Sahih Al-Bukhari).

This surah, along with two others, is recited so as to seek healing and cure from Allah the Almighty as was narrated by Lady `A’ishah:

“Whenever the Prophet went to bed every night, he used to cup his hands together and blow over it after reciting Surat Al-Ikhlas, Surat Al-Falaq and Surat An-Nas, and then rub his hands over whatever parts of his body he was able to rub, starting with his head, face and front of his body. He used to do that three times.” (Sahih Al-Bukhari)

Overall Theme of the Surah

This Surah defies all those who worship anything or anyone other than Allah such as idols, Jesus, `Uzayr, the sun, the moon, or any other deity that is worshipped other than or besides Allah the Almighty.

It confirms that Allah is the One and Only Who deserves to be worshipped; the Singular Who has no associates; the Unique Who has no peer; the Almighty Who has no aides; the Unrivalled Who has no rival; the One Peerless has no equal, and the Matchless Who none is comparable to Him.

Though the Surah is concise, its words are exuberant and bear many denotations and connotations:

The word Ahad stands for the One Who has no peer, aide, or rival. It cannot be used for anyone except Allah because He is Perfect in all of His Attributes and Actions.

As-Samad refers to the One Who all creatures depend upon for their needs while He needs none. He is the Master whose control is complete and perfect. He is the Self-Sufficient Master.

Reflections on the Surah

This Surah should be taught to all, especially our teenagers, whether they are born Muslims, new Muslims, or even ex-Muslims who reverted to Islam.

Just as the one I saw today in the Masjid taking Shahadah; a non-practicing born Muslim who defied both his parents and the innate inclination within his soul towards faith. Consequently, he refused to accept Islam as a way of life.

After many years of rejection, deviation, straying, and loss, he eventually found Islam. Through researching, he returned to declare his sincerity and complete faith in the One and Only God, Allah.

Therefore, if one gets to know that Allah is the One, the Self-Sufficient, Who does not have a spouse, a son, a peer or rival, one becomes certain that He is the One Who deserves to be worshipped and obeyed.

In conclusion, many are those who learn Allah’s Divine Attributes by heart; however, it is not a matter of memorizing. Instead, we should understand these Attributes and let them be an effective factor in our lives; we should emulate and practice them as much as we can.

As the Prophet said:

“There is no one more patient with something offensive that he hears than Allah. They attribute a son to Him, while it is He Who gives them sustenance and cures them.” (Al-Bukhari)

Based on this hadith, should you be harmed by anyone, would you be patient and continue being kind to him?!

Will you learn from Allah’s Divine Patience and become yourself patient, helpful, sympathetic, generous and benevolent?!

This article was originally published by AboutIslam.net on May 24, 2019. The original article can be viewed here.

10 Ways to Become One of People of Quran